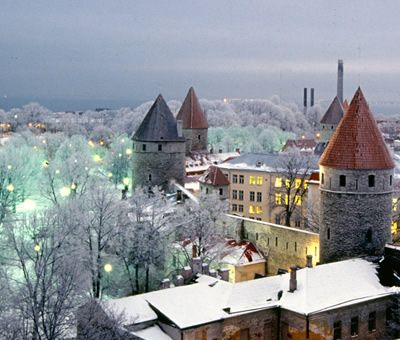 Here’s a radical suggestion to make the best of the current tough times: why not move to Estonia?

I was there recently to explain to them how to cope with the current recession. Last time we in the UK went through one in 1991, Estonians were rather preoccupied with becoming independent from the Soviet Union. At the time, many expected the worst; they had seen both German and Soviet tanks in recent history. But they came through the process as a new, young country, keen to share their own skills with the outside world.

One thing they decided to do early on was to make the most of the new internet technology. It helped not having archaic legacy systems: Estonia resolved to make itself an e-country and put everything on the web.

Today, Estonians have an entirely connected country, with a completely transparent legislature and everyone happy to submit their tax returns on-line. Identity cards were seamlessly introduced; it obviously helped to have a population used to a high level of surveillance, but the main driver in their swift adoption was making the identity cards also work on the public transport system.

Mobile phones are used for almost everything, including a simple public parking system, now being taken up by local authorities around the world. It will soon be used for voting in elections. Estonia’s dynamic business environment has been able to catalyse several well-known international successes, including Skype, the internet-based voice service.

Generally, Estonia is doing better in the recession than most countries. It has suffered an inevitable slump in property prices, arguably an expected consequence of the previous unsustainable boom. Many people have lost money, but the wise ones are just biding their time, waiting for the market to recover; after all, there is only a finite amount of space in the country, as in the UK.

Of course, Estonia is only a very small country with around 1.3 million people, and so does not represent a very big market for the major players. But Estonia’s small size also provides one important advantage. You can get things done.

I had a very agreeable chat over a beer with Estonia’s president, Toomas Hendrik Ilves. Charming and relaxed, he explained that Estonia had fared better in the recent crisis as their banks are owned by Swedish and Finnish institutions, which suffered back in 1991 and have consequently been much more circumspect and risk-averse since.

He gave me details of their low fixed rate of corporation tax and 100% relief for companies that re-invest. He suggested that more people from the UK might want to base their companies in Estonia, easy to do as the country is a member of the European Union.

You may recall a recent news item detailing how our National Health Service has fallen down the league table below Estonia. You may also have read items that express concern over the costs and problems associated with the twelve billion pound patient record system currently under development.

I met an Estonian doctor, Madis Tiik, who had been looking at the same challenge in his country. Lacking any detailed understanding of complex project management, and oblivious to suggestions that it was impossible to implement, he just got on and did it. The system is being rolled out next year.

I understand that the UK database is much larger. But I also observe that entrepreneur-driven businesses based on huge databases such as Friends Reunited and Facebook seem to be managing quite well, using simple standards and XML: you can put anything in a web browser.

Perhaps this is why many successful entrepreneurs move to islands or other small countries. They remember the tribal atmosphere of the early days of their start-up, when if they said something it got done. Having status in a small community can make things happen quickly, as long as you know the right people. The bigger the country, the more silly rules there tend to be.

If this is the case, then would you not prefer to be in a small country like Estonia, where you can get things done quickly, and more importantly, make a real difference?

The Republic of Estonia is situated in the Baltic region of Northern Europe, bordered to the north by the Gulf of Finland, to the west by the Baltic Sea, to the south by Latvia, and to the east by the Russian Federation. It has around 1.3 million people and one of the best telecommunications infrastructures in the world. It is a member of the United Nations, the European Community and NATO.