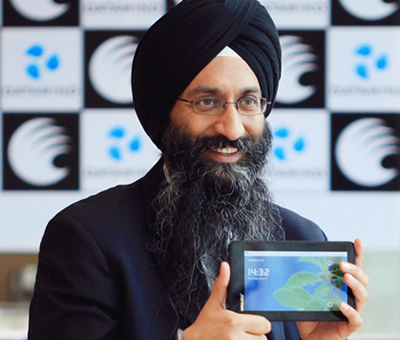 Everyone is looking for original ways of promoting their product, a good angle to make them stand out in a crowd. Suneet Tuli had an interesting idea: to get into the Guinness Book of World Records.

Tuli studied as a Civil Engineer and always expected to join the family construction business. But in the early 1990’s his brother Raja spotted a problem, the need to transfer engineering diagrams, very large documents, from one location to another. They envied the ease with which people were using the then new fax technology to transfer documents simply and inexpensively, so decided they should build a very large fax machine.

The technical issues involved were significant. First, they had to cope with four feet by three feet documents and then had to make sure the paper did not stretch in the process, as engineers needed an exact copy at the far end for the precise measurement of their work. Finally, they had to figure out how to transfer this large amount of data in a reasonable period of time

They solved these difficult technical problems but then faced an even bigger challenge. Not only did they have to find out precisely who needed a very large fax machine, they also had to sell two units at a time: one to send, one to receive. There was the additional issue that they were invariably dealing with very large organisations with long sales cycles, which represented a cash-flow problem for a small, family business.

Tuli remembered his experience as editor of the University newspaper, and mused over a few low-cost promotional ideas before settling on what would prove to be highly effective: they would pitch their product to the Guinness Book of World Records as The World’s Largest Fax Machine. There was some scepticism at first, but the official record assessors eventually agreed, pairing them with The World’s Smallest Fax machine from Ricoh.

The appearance of The World’s Largest Fax Machine in the Guinness Book of World Records coincided with regular fax machines finding their way into offices and homes, superceding expensive and unwieldy telex machines. Faxing documents had entered the public consciousness, so pictures of Tuli’s record-breaking big fax machine found their way into a wide range of specialist and mainstream publications.

This led to a healthy flow of sales enquires from organisations that Tuli would never have known how to contact, such as fashion houses that needed to send and receive designs to and from their manufacturers in the Far East. Business boomed, and Tuli was soon diversifying into other products!

Tuli is now CEO of DataWind, which he co-founded in 2001 with his brother, Raja Tuli. DataWind aims to bring low-cost internet connectivity to billions of unconnected people: www.datawind.com