Something About The Beatles (and Stackridge) 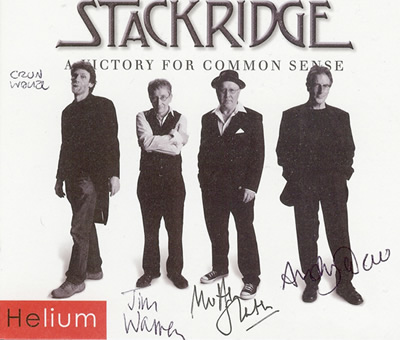 I am often asked what I think about the television show Dragon’s Den.

While it has done a sterling job in raising awareness of entrepreneurship in the UK, particularly amongst young people, it has to be remembered that it is only a television show.

You could argue that it has as much to with day-to-day entrepreneurship as The X-Factor has to do with The Beatles. But after further consideration of this analogy, I realised that The Beatles themselves were entrepreneurs, and followed the Beermat model.

They developed an elevator pitch (‘like Elvis, Little Richard and Chuck Berry, only local’), found a mentor (their manager Brian Epstein), and then a first customer (producer George Martin, who signed them to EMI).

They had plenty of upsets and rejections along the way, including being famously turned down by Dick Rowe at Decca, who famously said that ‘guitar bands are on the way out’.

But eventually The Beatles were at the right place at the right time, specifically The Ed Sullivan Show on February 9th 1964, when Paul McCartney counted in All My Loving and 73 million people simultaneously got the point.

There was inevitably competition, for example in the shape of The Beach Boys’ stunning Pet Sounds, but they immediately innovated clear of the pack with Sergeant Pepper’s Lonely Hearts Club Band.

They were then at the peak of their powers, delivering probably the best double A-side of all time, Strawberry Fields Forever/Penny Lane. Ironically, this was the first Beatles single for 5 years not to go to number one, beaten to the top slot by Release Me by Engelbert Humperdinck: proof that the customer is not always right…

That year, 1967, also saw them release the best song ever written about entrepreneurship, All You Need Is Love. What entrepreneur could argue with the opening line: “There’s nothing you can do that can’t be done”?

But in August 1967, the Beatles had another critical moment; their manager Brian Epstein died of a suspected accidental drug overdose. The Beatles decided they could manage themselves, but their next project, Magical Mystery Tour, while containing fabulous music, was a critical flop, a self-indulgent film which did not really work on black and white TV, the only multimedia platform available in most homes that Boxing Day.

Then came their next album, The Beatles, now known as The White Album, which again featured great songs, but was a less than pleasant experience for them, with Ringo Starr quitting at one point.

George Martin became exasperated by the lack of teamwork — sometimes they would work separately in three different studios — and, disappointed by the final result, resolved not to work with them again.

The next Beatles project, which eventually became the album Let It Be, was another difficult experience, and was shelved. But they decided to come together with George Martin again for one last album, Abbey Road, which he described as a very happy album to produce.

The Beatles story has many business learning points, and is now my keynote presentation for both entrepreneurs and large organisations. It goes down particularly well in schools and colleges, which gives me great hope for the future of UK plc.

My talk is called Something about the Beatles, the title of a song by my second favourite band, Stackridge. Their career in the 70s attempted to replicate much of the Beatles model: they were a popular live act, were produced by George Martin, and even played at a national stadium (Wembley, rather than Shea). But they did not sell millions of records, and eventually split up.

However, the Stackridge story has a happy ending; two of the members, James Warren and Andy Davis, later formed The Korgis and had a huge international hit with Everybody’s Got To Learn Sometime. Stackridge have now reformed, are touring again, and have just released an excellent new album, A Victory For Common Sense.

I met with them at their recent 100 Club gig in London, and they seemed serene and radiant. They felt they had made a success of their lives — a useful reminder to all entrepreneurs that you don’t have to amass vast wealth to create a successful business with happy staff, happy customers and enough money to go around.

As The Beatles themselves said on Abbey Road, “And in the end the love you take is equal to the love you make.”

Stackridge can be found at www.stackridge.net