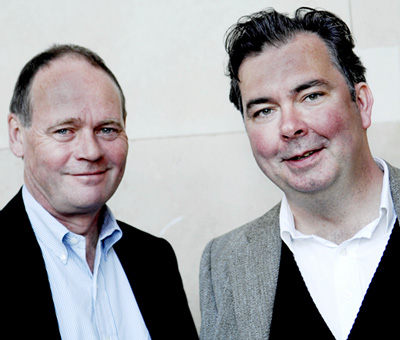 The QI books are its physical manifestation, a potpourri of fascinating information and excellent jokes, expertly crafted under the direction of comedy legend John Lloyd, whose previous credits include Spitting Image and Blackadder. Easy for him, then, you might think, but look a little closer and you will find a story of genuine struggle and entrepreneurship, and a surprisingly subversive agenda.

At the end of the 80s, with two lifetime achievement awards under his belt, John retired from broadcasting and threw himself into the corporate world, directing dozens of comedy adverts, most famously for Barclaycard with Rowan Atkinson’s bumbling spy.

Jetting around the world, an acknowledged master of both television comedy and its commercial offshoot, John had a sudden realisation. Despite a passion for knowledge that had been with him since boyhood, he really didn’t know anything… Science does amazing things, but nobody actually knows what gravity, laughter, viruses, consciousness or even life itself actually are.

Back home in the village pub, he outlined these thoughts to his neighbour John Mitchinson, a senior publisher on gardening leave. They agreed that a new approach to learning was needed. Rather than peddle false certainty, they would admit ignorance and help people find their own ways to knowledge by stimulating interest in the world.

Part of this subversion would be the debunking of conventional wisdom, another part the dissemination of quirky facts. Did you know that female kangaroos have three vaginas, that the steam engine was invented in ancient Greece or that only one species of frog in the world goes ‘ribbit’?

So, from a tiny serviced office in Oxford, with two recent graduates as researchers, the two Johns set out to change the people’s perception of the universe. Given John Lloyd’s contact list, the TV series was the easiest way to begin, so they wisely took that route. But how to follow that? They decided that QI needed a physical expression, too, and decided to start a private members’ club.

Raising some £750,000 in private investment, they opened the QI Club in Oxford, meticulously furnishing it with an excellent restaurant, a welcoming café-bar, an eclectic bookshop that only sold ‘quite interesting’ books, and a terrific programme of events.

It was a big mistake. The mechanics of running a catering business are not for amateurs, however gifted; the pressures of staff and financial management are intense, and, from the very start they began to lose money.

After 3 years, working all hours and sinking all of their savings into the project, they concluded that the club required significant extra capitalisation, beyond the means of themselves or the will of their investors. They arranged a trade sale of the club, and refocused their efforts into their core businesses: television and books.

They have not looked back. The television show attracts over five million viewers. They currently have three books in the Amazon top 40 and a bestseller in the New York Times’ list. The first book has appeared in 23 other countries from China to Brazil. QI’s plan — to amuse, inform and educate the world by stealth — is clearly working.

A core belief of QI is that anything can be made interesting if looked at long enough, closely enough or in the right way. They recently applied this theory to the first QI corporate video, for a multinational insurance company.

The Finance Director had just been elevated to the top job, and wanted to get across that a backroom number cruncher can also have the vision and personal qualities to lead a global company.

John filmed him talking with five professors from INSEAD, the business school headquartered in France — gaining insights into subjects as diverse as IT, climate change and corporate responsibility. The new CEO, never before known to take off his tie, turned out to be a natural on camera: warm and open-minded with a quick sense of humour. And, of course, it was all quite interesting.

A pub lunch with John left me buzzing with optimism. His almost throwaway comment “you should do entrepreneurship for kids” has had me thinking of little else since. When I speak in schools and universities about starting businesses, they really seem to get it.

My biggest challenge is to explain that not all bosses are like Alan Sugar and that entrepreneurship doesn’t necessarily have to involve facing a panel of ‘Dragons’.

For me, the lessons of QI are clear: start with a great idea, stick to what you know, stick at it, but have the courage to cut your losses if you must.

Meanwhile, I’m off to get the splendidly titled QI interactive DVD game ‘Strictly Come Duncing’ for my 10-year-old son for Christmas. If he’s more engaged by the mixture of meticulously researched facts and really good jokes than destroying intergalactic alien monsters, then that will be Very Interesting…

After a promising start at King’s School, Canterbury, John Lloyd went to a pub near Trinity College, Cambridge where he was eventually head-hunted by a man in a beard from the BBC. He started The News Quiz, ‘Quote… Unquote’, The News Huddlines and To The Manor Born.

He produced Not The Nine O’Clock News, Spitting Image and Blackadder and played a key role in The Hitchhiker’s Guide To The Galaxy and Mr Bean. In his spare time he shot TV commercials.

In 2002 he set up Quite Interesting Limited with John Mitchinson. The panel show QI first aired on BBC2 in September 2003 with Lloyd producing and Mitchinson masterminding the research and writing. In 2008 it won the Royal Television Society Award for Best Entertainment Programme and the British Comedy Award for Best Comedy Panel Show.

John Mitchinson has worked in the book trade for more than 20 years. He was the original Marketing Director of Waterstone’s, leaving in 1995 to become Managing Director first of the newly independent Harvill Press and then Cassell & Co.

He published a diverse list of authors and subjects including The Beatles, Michael Palin and Brewer’s Dictionary of Phrase and Fable. John is also a Vice President of the Hay Festival, chairs the London International Centre for Storytelling and is a fellow of the RSA. In his spare time he keeps rare breed pigs.