A Wit and to Woo 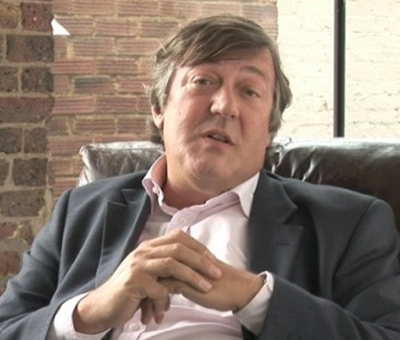 Stephen Fry, as you all know, is an actor, presenter, author, director and unofficial national treasure.

What you probably also know is that he is also a mega-star on the social blogging site Twitter. Stephen is one of the most followed Twitterers in the world with over one million followers, and his following is growing daily.

I caught up with him at the Apple Store in Regent Street, where he was speaking as part of their ‘Meet the Author’ series. Despite his old-world appearance, he is a self-confessed gadget freak, having purchased the second Apple Macintosh in the UK (his friend and Hitchhiker’s Guide author Douglas Adams bought the first).

Twitter is his latest enthusiasm. As one would expect from Stephen, this enthusiasm is driven by a sense of fun, but also based on sound reasoning.

Stephen is a natural for Twitter. He is his own man, and will speak his opinions loud and clear in the search for universal truth and beauty. He sets strict guidelines for how he uses the site, explaining that he only responds when inspired to do so, and apologises profusely that the large number of his followers means he cannot be everyone’s friend, all the time.

He very occasionally uses Twitter to promote something that catches his fancy, such as a good cause, though he does make frequent references to projects he is working on. Generally he talks about whatever he feels passionate about, from endangered species to his favourite talking books. One time he got stuck in a lift for half an hour and posted some pictures, which made their way into several national newspapers. How’s that for PR?

At his talk, he was asked if he thought the kids of today spent too much time on the internet. He observed that all through history, kids’ elders and betters have been complaining similarly. Before the internet, it was about time wasted watching TV; before that, the radio was seen as a pointless distraction. In the 19th Century novelists like Jane Austen were regarded as facile and lacking in educational merit.

After the event, Stephen showed what a professional public figure he is. A queue of people, mostly in their 20s, formed to speak to him. He engaged each of them personally, signing long messages on books and scraps of paper, and happily having his photograph taken with them. Some gave him little notes, not with phone numbers but with their Twitter ‘handles’, hoping that Stephen would follow them.

I asked my own Twitter friends what benefits they received from the site. Alan Stevens, who provides media training and consultancy to CEOs, considers it the best recession-beating business tool he has come across, having received more business directly from Twitter in the last month than from all sources in the previous quarter.

Business author Ian Sanders uses Twitter for the promotion of his new book, Juggle! and secured a lucrative speaking engagement in Texas. Claire Richmond, who runs the site Find a TV Expert explains that if you work alone, the ‘tweets’ give you a sense of having people around you, like the buzz of an office.

For enthusiasts, Twitter means they can successfully build their on-line brands exactly as they choose, based on regular and direct interaction with followers and customers. So perhaps we are entering a new era of genuine celebrity, not based on cynicism massaged by Photoshop and public relations, but on curiosity and positive engagement with the world.

As one of Stephen’s favourite poets, William Wordsworth, himself might have Twittered: “Bliss was it in that dawn to be alive, but to be young was very heaven!”

Stephen Fry is an actor, writer, comedian, author, television presenter and film director. He has appeared in A Bit of Fry and Laurie, Jeeves and Wooster, Wilde, the Blackadder series and is the host of the panel comedy trivia show, QI. He has recently presented his 2008 television series Stephen Fry in America and has chaired I’m Sorry I Haven’t a Clue. www.stephenfry.com